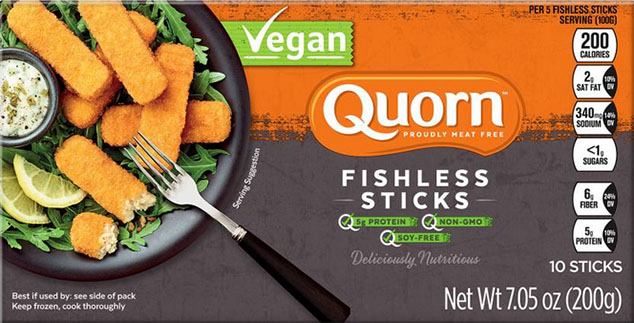 Quorn, which prides itself as providing delicious food that is good for people and the environment, has recently introduced Vegan Fishless Fillets.

It’s a new take  on the high seas with a healthy and sustainable take on traditional English food.

Here’s the scoop: As the global population increases, statistics suggest there is increasing demand on our oceans and seas to produce even more fish. However, Quorn, a leading UK meat-free brand has come up with a different approach to preserve the resources of our seas and oceans while providing a healthy and sustainable take on Classics British meals.

At a time when nearly two thirds of UK consumers (57%) believe reducing meat consumption would be beneficial for the environment and with the majority of the population (52%) actively reducing the amount of meat they eat, the launch of two Quorn Vegan Fishless Fillets, a nice option for mid-week dinners, is welcome news for anyone wanting to be a little bit kinder to the planet.

The range will launch in March 2019 and will be available in all major supermarkets nationwide.

Not only is the launch of Quorn Fishless Fillets good news for vegans who don’t eat fish, but it will also offer choice for pescatarians, vegetarians and the increasing number of meat reducers who are open to vegan products as a way to reduce the impact of their diets on the planet, whilst still enjoying their favorite dishes.

Stored frozen, all products in the fishless range are oven-cooked in 22 minutes, making them a great mid-week meal option or weekend dinner idea for busy individuals and families.

How to Eat Vegan at a Breakfast & Brunch Restaurant !

NutriBullet® Blender Goes Cordless for Smoothies on the Run