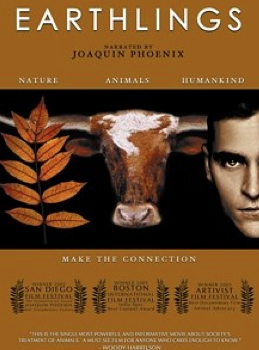 If you are looking to convince people of the ethical aspect of veganism Earthlings is one of the most influential and powerful vegan documentaries out there.

In this haunting movie narrated by Joaquin Phoenix, hidden cameras are used to show the truth about the exploitation and killing of innocent animals for pets, food, clothing, entertainment, and science.

The graphic footage is very painful and disturbing to watch. It’s shocking but eye-opening at the same time.

The movie compares the exploitation and killing of certain species to racism and sexism. The message that we are all creatures that feel pain, seek to survive and want to minimize suffering is made clear.

This film is often referred to as “The Vegan Maker” with its revelation of the truth of humans’ interaction with animals.

Movie Recommendation: “My Octopus Teacher” – Wrap Your Head, Heart and Arms Around this One!

Vegan, Gluten Free Wine Startup is in the Can: For Real!