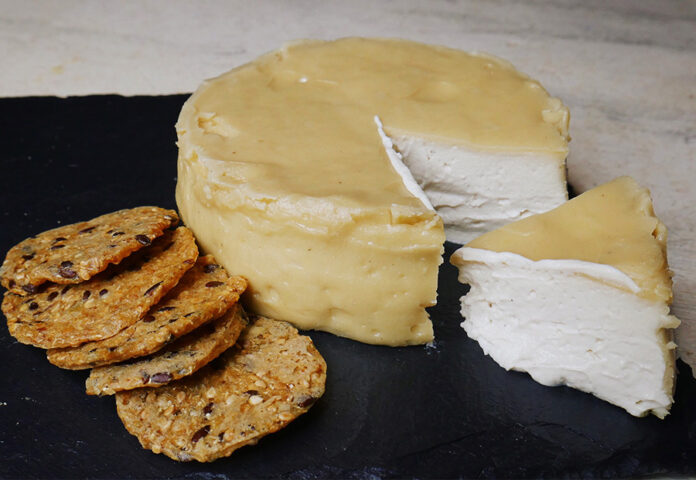 This Vegan News Daily Brie – straight from our Test Kitchen — tastes and looks like it belongs on a delicious  cheeseboard that you’d order from a restaurant in France.

Brie originated in Seine-et-Marne, France. Legend tells us that that in the 8th century, French Emperor Charlemagne first tasted Brie at a monastery in Reuil-en-Brie and fell in love  with the creamy, rich flavor. Who wouldn’t?

No surprisingly, the cheese became a favorite among royalty and countrymen.

Did you know that authentic French Brie cannot be imported into the United States?! Why? Because it is made with raw milk and would, therefore, need to be aged for at least 60 days to qualify for U.S. importation.

Brie is traditionally made with whole or semi-skimmed cow’s or goat’s milk and salt. Classic Brie is also full of saturated fat which has been known to increase your risk of heart disease. Brie has a creamy interior and an edible white rind.

Luckily for the animals and your health, there is absolutely no need to use animal products in our Cheeze recipe!

Our Vegan Brie will wow your taste buds and leave your body, mind and soul feeling satisfied and peaceful.

This tasty Vegan Brie will be featured in our upcoming Vegan Cooking Series in September: Fall in Love with Flavor!

This delicious appetizer will be featured in our upcoming vegan cooking series called Fall in Love with Flavor!  It begins on September 22nd so make your reservation today at: VeganNewsDaily.com/LOVE .

Our series has three action-packed classes. Every class is 1-hour long and has a fun theme…

Don’t worry if you have to miss a class–you’ll receive full-length video recordings of each episode in your own private video playlist. And, 10% of all proceeds are donated to food banks!

Make your reservation today at: VeganNewsDaily.com/LOVE. We can’t wait to host you!

Meal Prep Can Be Fun and Easy: Really!

Green Smoothie 101: How to Ace this Class