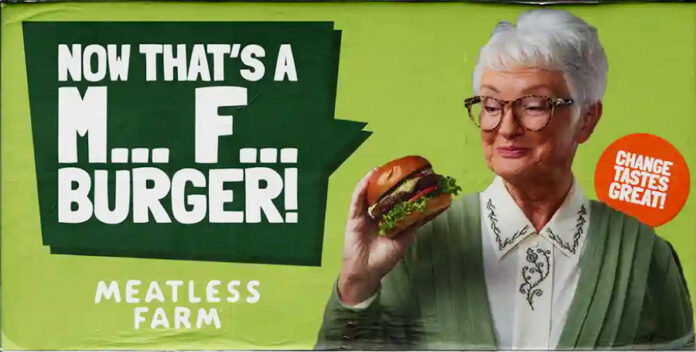 A growing U.K. based vegan producer of plant-based foods is dropping a big faux f-bomb to shock and awe Englanders into eating less meat.

The company is Meatless Farm – with initials “MF” – and is running a national ad campaign in the England to encourage a nation in love with its bangers and burgers to give plant-based meat a serious try.

Meatless Farm seems to be sprouting big time, as sales have nearly tripled – up by 179% year over year.  What’s more, a third of Britons now say they have eaten more plant-based food while confined to their homes.

Noted Michael Hunter, Meatless Farm’s chief growth officer, said: “Throughout lockdown we’ve seen a surge in sales, with more and more Brits trying or considering making the swap to plant-based, even if it is just once a week.”

The initiative, and the campaign, seem to be working. The company was founded in 2016 by Morten Toft Bech “to help people reduce their meat consumption.”  Since then, the company noted, it has  developed a plant-based range of meat alternatives which are easy to cook and above all, are full of taste and texture.

NATURELO Partners with Vitamin Angels to Support Mothers in Need

Earthlings: The Vegan Doc that will Shock