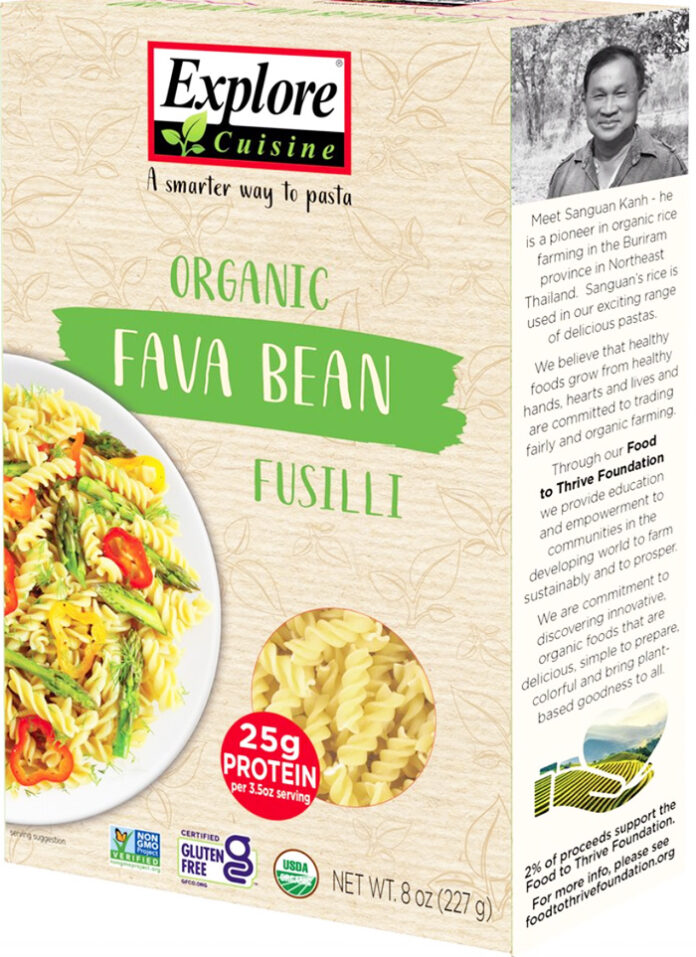 Explore Cuisine has announced that it will be introducing an organic, gluten-free pasta-alternative made from fava beans.

The goals is to offer a healthy pasta that it similar to traditional pasta in terms of taste, texture, and appearance.

With three times the fiber and two times the protein than traditional wheat-based pasta, Fava Bean Fusilli provides up to 25 grams of protein and 8.75 grams of fiber per 3.5-ounce serving and contains less than half of the total carbs. Mild and creamy in flavor, fava beans, also known as broad beans, have been enjoyed since the 4th Century.

“We are so excited to launch our new Fava Bean Fusilli! Our consumers not only love the taste and texture and how close it is to traditional pasta but also the benefits of more protein, fiber, and lower carbs. Additionally, this is the first new ingredient to come out of our Food to Thrive partnership with farming communities in Thailand, making it a product that makes an impact far beyond your dinner table,” said Gregor Forbes, CEO of Explore Cuisine.

The Fava Bean Fusilli is also naturally vegan, 100% organic, and cooks in just five to seven minutes. There are no additives such as potato starch, binders, or gums.

Fava Bean Fusilli is available on Amazon and ExploreCuisine.com and will be rolling out to retailers nationwide. The Fava Bean pasta line will also be launched in different shapes in the coming months.

Plant-based Meat Industry to Grow by 24% Per Year