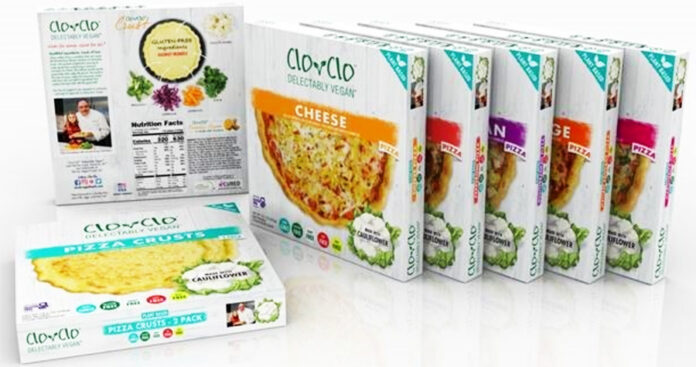 The products are currently available chain-wide at Sprouts Farmers Markets stores. Each pizza is plant-based, non-GMO, and 100 percent free of the top allergens.

A highlight of the Clo-Clo products, the company notes, “is the significant advancement in the quality, flavor and texture of the patent-pending, cauliflower-based cheese.”

When co-founder Wendy Hinnenkamp discovered her daughter Chloe, suffered from Eosinophilic Esophagitis—a condition that makes it dangerous, even deadly, to eat certain foods—they set out to develop a line of products Chloe could eat safely, provide nutrition, and allow her to eat the same foods as her family. They needed products without the foods commonly associated with food allergies (milk, wheat, soy, egg, nuts, and fish).

The Hinnenkamp’s found 40-year culinary veteran and award-winning chef Robert Velarde, who embarked on a mission to develop what became Clo-Clo Vegan Foods. As consumers became more interested in a healthier diet, Velarde challenged himself to create products that rivaled the flavor of their traditional counterparts.

How Not to Die: A Must Read Recommendation and NY Times...