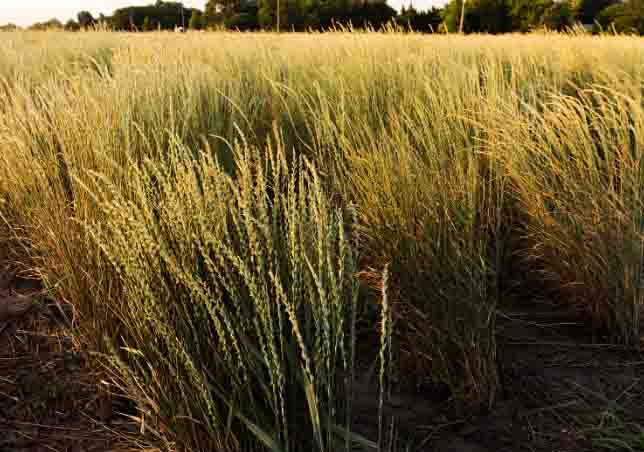 If you’re like the rest of us, you’ve probably never heard of Kenza, but hang onto your hats and your breakfast cereal because this recently enhanced grain may change not only what we eat but how we cultivate food crops across the planet.

It also could make a major dent in climate change.  So, let’s get to it.

Flashback 40 years ago with Wes Jackson. a scientist-environmentalist who believed that humans made a big mistake thousands of years ago when they began to rely on crops like wheat and rice for sustenance.

Here’s the rub: These “annual” crops need replanting each and every year.  As a result, to get those seeds to germinate, you’ve got to destroy the vegetation at the surface,” clearing away anything that might compete with the fragile seedlings, Jackson said.

That starts a chain reaction. Farmers use tools to till the land and more recentlyr herbicides to get rid of competing vegetation.  In that way, the natural habitat for birds and insects is wiped out.  What’s more, bare soil washes away and pollutes streams and rivers. And, tilling the soil releases enormous quantities of CO2.

“Beginning in 1988, researchers with the USDA and Rodale Institute undertook two cycles of selection for improved fertility, seed size, and other traits in New York state.

“The Land Institute’s breeding program for intermediate wheatgrass began in 2003, guided by Dr. Lee DeHaan. Multiple rounds of selecting and inter-mating the best plants based on their yield, seed size, disease resistance, and other traits have been performed, resulting in improved populations of intermediate wheatgrass that are currently being evaluated and further selected at The Land and by collaborators in diverse environments.

“Experiments are also underway to pair Kernza® with legumes in intercrop arrangements that achieve greater ecological intensification, and to utilize Kernza® as a dual purpose forage and grain crop in diverse farming operations.

“The Land Institute developed the registered trademark for Kernza® grain to help identify intermediate wheatgrass grain that is certified as a perennial using the most advanced types of T. intermedium seed. When you buy Kernza® perennial grain, you can be certain that you’re eating product grown on a perennial field that is building soil health, helping retain clean water, sequestering carbon, and enhancing wildlife habitat.”

And now for the future:  General Mills, makers and marketers of Cheerios and Wheaties, says it wants to make cereal out of it.

As NPR recently reported: “I think the R&D team saw this lovely grain and thought, ‘There is something we can do with it,’ ” says Maria Carolina Comings, marketing director for General Mills’ organic brand, Cascadian Farm.

“In recent months, General Mills gathered up all the Kernza grain that it could find, milled it, and made 6,000 small boxes of cereal to hand out as samples.”

What’s more, Kernza  can be used in baked goods and is now being sold in a number of restaurants including The Perennial in San Francisco, California, and Birchwood Café in Minneapolis, Minnesota. Many others have tested it in their products and kitchens.

The Land Institute notes: “Although current strains of Kernza® grain are lower in gluten strength than annual wheat, consumers sensitive to gluten should exercise caution.

“At this point, Kernza® is most frequently blended with annual wheat flour to make bread, and can make up 100% of the flour in quick breads (muffins, pancakes, etc.) or served as a pilaf like rice.

Kernza® has also been brewed into beer and distilled into spirits by a number of producers nationwide, most notably Long Root Ale from Patagonia Provisions.”