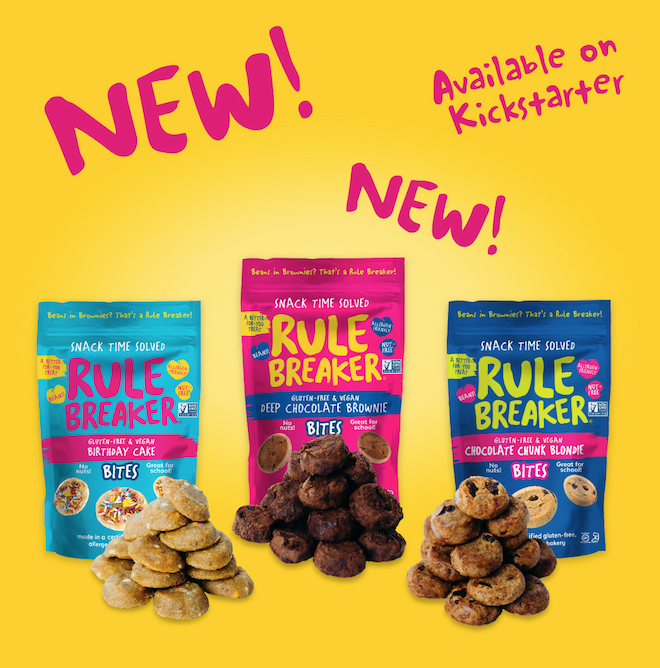 Over the past few years, Rule Breaker Snacks has offered brownies and blondies that are plant-based, gluten-free, nut-free and allergy-friendly. Now the company is raising funds and seeking support to launch bite-sized versions of the blondies and brownies in three flavors.

With a successful Kickstarter campaign, Rule Breaker Bites will hit the market in late summer 2019 in three flavors, Deep Chocolate Brownie, Chocolate Chunk Blondie and Birthday Cake. As with all Rule Breaker Snacks, new Bites are:

Founded by Nancy Kalish, a former health journalist (with a serious sweet tooth) looking for better-tasting, better-for-you sweet treats for herself and her family, Rule Breaker Snacks burst on to the scene just three years ago with Deep Chocolate Brownies and Chocolate Chunk Blondies that feature beans along with other wholesome ingredients to create truly delicious, indulgent and guilt-free goodies. Since then, the company has expanded into new channels, dramatically increased its retail presence and has substantially grown online sales.

“Our full-size Rule Breaker Snacks have made quite a splash and we’re amazed and excited to hear from so many who enjoy them on-the-go, as a snack and even for breakfast,” says Nancy Kalish, founder of Rule Breaker Snacks. “We’ve also heard they love to cut them up for a smaller serving or to top favorite foods like yogurt and smoothies, so we thought ‘now that’s a great idea, why not make it a little easier?’ But we are a tiny company and like so many others in the better-for-you food space, we need help to make it happen.”

The goal of the Kickstarter campaign is to raise a sum of $10,000 to support creation of the new product including manufacturing equipment and packaging. Supporters and backers can learn more about the campaign, which features a range of fun and generous rewards, on the Rule Breaker Snacks Kickstarter campaign page. Stretch goals, which would also trigger exciting new Rule Breaker Bites flavors, are also outlined on the project page.

Mexicana Vegana Rises as Next Major Flavor in Focus

2019 is “Year of the Vegan” Says The Economist and Forbes