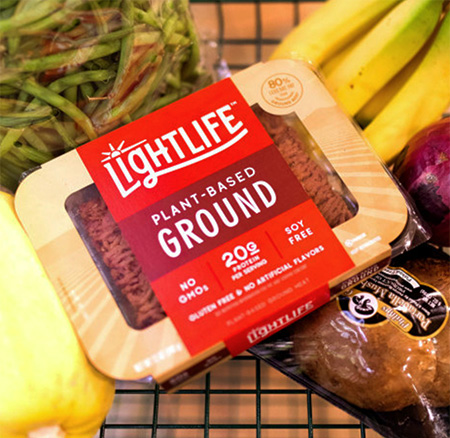 Lightlife Foods, a leading refrigerated alternative protein brand in U.S. retail, announced that the Lightlife® Burger and Lightlife® Ground, new plant-based meat products that strives to deliver the sensory experience consumers associated with beef, will be available in the meat aisle at thousands of stores across North America.

Locations for the new entrants will include Acme, Albertsons, Haggen, Jewel, Pavilions, Safeway, Vons, Wegmans, and hundreds of natural foods stores in the U.S.

Other U.S. retailers will begin carrying the new Lightlife products throughout the summer, including Whole Foods in July. In Canada, these items will be on shelf in over 3,400 stores, including Federated Coop, Loblaws, Longo’s, Metro, Save-On-Foods and Sobeys.

The new line offers the taste, texture, aroma and appearance of traditional meat, but is made of plants, giving you a familiar taste that fills people up without weighing people—or the planet—down.

Free from GMOs, gluten, soy and artificial flavors, Lightlife’s new products appeal to consumers at all points on the plant-based journey, whether someone is simply seeking to reduce their meat consumption or is already a committed vegetarian or vegan.

The patty is made from familiar ingredients—including virgin coconut oil and beet powder—which work together to make a juicy and meaty burger. Because it’s made to grill, cooking the burger over an open flame will enrich its tender, beefy texture.

“This launch is very exciting time for the business and the brand,” says Dan Curtin, President of Greenleaf Foods, the parent company of Lightlife. “We’ve said it before: we didn’t join the plant-based category overnight—we’ve long been pioneering the industry.”

CBD Oil Part I: What’s All the Hype About Hemp?

Sunflower Seed Cereal to Light Up the Breakfast Table