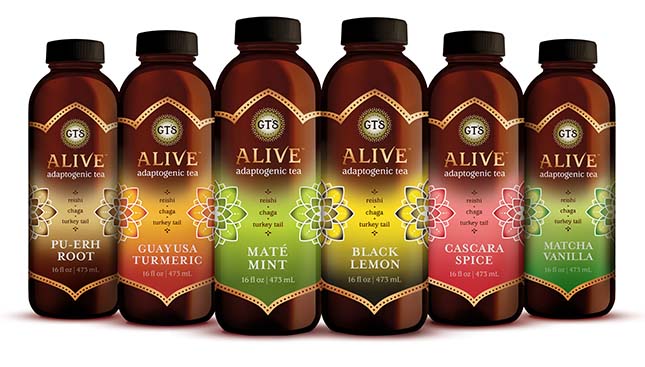 GT’s Living Foods, maker of the original Kombucha and a leading selling brand in the U.S., has announced the launch of ALIVE, a line of adaptogenic teas inspired by Ayurvedic medicine.

An infusion of three adaptogenic mushrooms, Reishi, Chaga and Turkey Tail, is combined with select varieties of invigorating teas and a touch of raw apple cider vinegar. The result, according to the company “is a light, refreshing beverage that helps support the body’s ability to fight stress and balance your natural energy.”

“As consumer interest and consumption of adaptogenic foods began to increase, coupled with the demand for holistic alternatives to combat daily stress, I saw a huge gap in the market for a functional wellness beverage,” said GT Dave, founder of GT’s Living Foods. “Inspired by ancient practices of holistic health, I’ve combined sacred gifts from Mother Nature to craft ALIVE to help re-center the mind, restore the body, and revitalize the spirit.”

ALIVE is available in six flavors: Black Lemon, Cascara Spice, Matcha Vanilla, Guayusa Turmeric, Mate Mint and Pu-Erh Root. The flavors offer a crisper, revitalizing alternative to the brand’s signature Organic & Raw Kombucha. The line is now available nationwide in Whole Foods and other natural food stores with an SRP of $3.99 per bottle.

How to Pack a Perfect Vegan Lunch Box